A Short History of Leather

Leather -The Lord Of Fabrics: A Short History 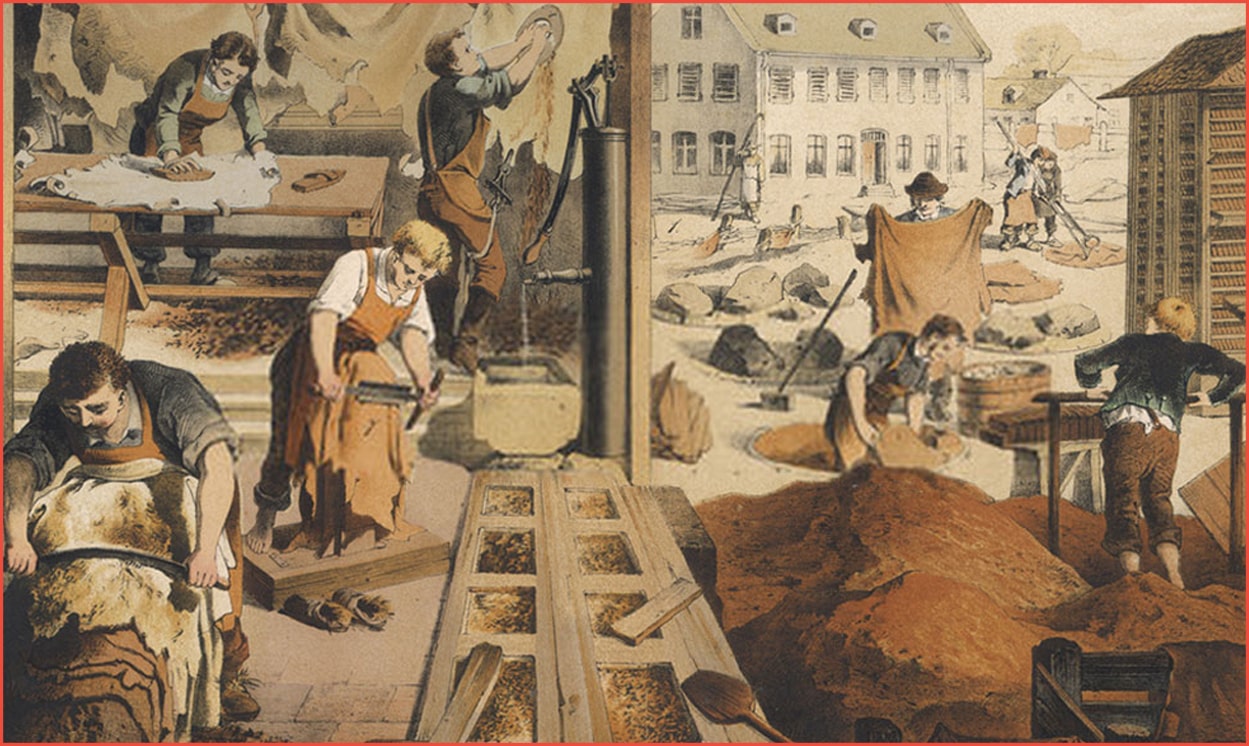 Leather has a long and illustrious history. It is one of mankind’s oldest materials, having been used for clothing and tools for thousands of years. To protect their bodies, our ancestors used leather produced from animal hides. Without a question, it has played an important role in the development of civilization and is a magnificent example of resourcefulness.

Leather, on the other hand, has been a vital part of fashion and design for ages and is one of the world’s primitive and most valuable discoveries. Earlier, men hunted wild animals for food, then used their hides to make clothes, footwear, and rudimentary tents. Some aspects of the early leather-making technique, as well as a related craft, are still in use today. Leather indeed has a long history of tying people from all over the world together.

But what is it, exactly? Let’s take a look closer at this excellent material.

What Exactly Is Leather?

Factually people used to wrap their bodies in dried animal pelts, but skin stiffening and rotting were an issue. As a result, they figured out how to soften and preserve the skin. That was the beginning of leather processing, and leather was born. The hides or skins were most likely dried in the open air and in the sun at first. They were then bathed in water and dried over an open flame. However, later on, the method of soaking twigs, barks, and leaving the skin in water developed, which assisted in the preservation of animal skins. Archaeologists reported that primitive man used the skins of hunted animals as a source of food and clothing.

Leather is made mostly from the hide or skin of birds, fishes, mammals and reptiles. The animal skins are then subjected to a tanning process, in which tanning compounds react with the collagen in the skin to render it waterproof, stable, and impervious to deterioration. 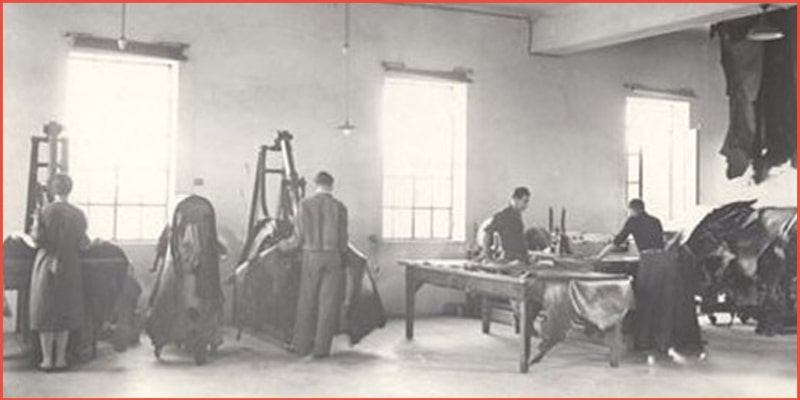 Back to the Beginning of Leather’s History:

One of the preliminary human artefacts was leather. Leather processing dates back to the beginning of time. Man sought shelter from the elements in the prehistoric past, but soon discovered that the animals he ate could be utilized not only as food, but also as clothes and houses.

The earliest evidence of leather craftsmanship, including hide scarping, according to academics dates back around 400,000 years. Neanderthals didn’t require clothes back then because their bodies were covered in hair, so the hunters, began collecting the skins of the animals they had just slain in order to use them as sunshades. During hunting seasons, they hung the hides on branches and took them. Because of the alternating rain and sunshine, these skins only survived a short time.

Around 8000BC, an unexpected flood struck, making the season rarer than it had been during the Upper Paleolithic (old stone age). Rain and sunshine grew more often, and the cold became more prevalent, prompting people to wrap themselves in blankets to sleep. As a result of the genetic mutation, they began to lose their thick hair. As a result, their skin began to demand protection. They started hunting more regularly and trying to make their skins last longer.

Around 2200 BC, a shepherd from Sinai butchered his goat, removed the skin, and defatted it with clay and salt, according to the Hittites’ record. Unfortunately, the skin was blown away by a burst of wind. It landed in a rock hollow, which was filled with water containing partially dissolved alum salts. The presence of salt on the skin was favored by the alum in the water, which prevented the skin from degrading. When the shepherd passed by the same rock a month later, he discovered his goat’s hide. Unusual thing was the skin went white but did not decay. He was astounded when he saw it. He picked it up, re-dried it, and wore it.

After seeing the skin’s success, he tried the process again under the identical conditions, but the skin didn’t degrade this time. He noticed that the water in this location had strange qualities and was high in salt, which he dubbed “Rock Salt.” That’s how he became the world’s first tanner. It was then specialized by Hittites, merchants, who sold it via caravans across different locations.

The Hittites were the only ones competent of tanning leather for about 1000 years. It was a feature that contributed significantly to their success. Many historians believe that leatherwork developed by accident. It’s uncertain how long ago vegetable tanning was invented, although it’s said to have happened by accident. 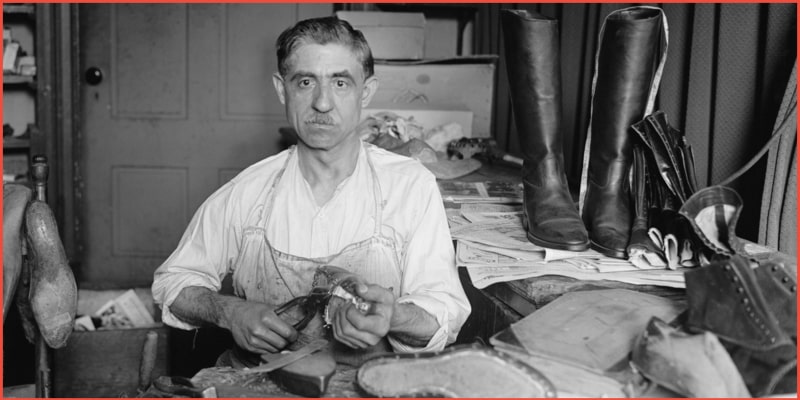 Historical factors can sometimes drive industries. Early European settlement in North America resulted in the development of leather businesses. Before 1650, tanneries had been built in New England, Virginia, and the Middle Colonies. Throughout the mid-nineteenth century, colonists continued to use European handcraft skills with modest adjustments.

Tanneries rose in number as the population of the United States and the colonies that made it up grew. Until 1850, the most significant developments in the sector were organizational. Emerging regional leather markets prompted the establishment of larger tanneries, the separation of merchants and tanners, and a concentration of tanning in cities with plentiful hides and the Catskill Mountains in New York, where hemlock trees abound. Augustus Schultz, a New York dye salesman, and Martin Dennis, a scientifically trained tanner, created chrome tanning, which substituted chromic acid for tannin and reduced tanning time, based on German innovations.

Later, the mechanized factory eliminated most hand labor in the leather industry during the second half of the nineteenth century. Unhairing, scraping, beating, splitting, tan, drying, and finishing leather machines were invented by tanners and leather-machinery companies. Leather machinery companies disseminated machines and knowledge of machine design, fostering inventiveness.

Today’s leather clothing and accessories market is inspired by previous eras due to a focus on quality and heritage. Whether it’s tough leather boots reminiscent of Western cowboys or vintage aviators that epitomize the WWII decades, fashion designers now draw inspiration from history to build the leather items of tomorrow.

Due of its long history, historical leather fashion styles will always be relevant. Designers who are, always in the search for fresh and inventive ways to use this classic fabric. Regardless of aesthetic or practicality and despite the difficulty of predicting its future trends or fads, leather will always have a big role in modern culture.

Visit leathersr.com if you’re interested in learning more about leather.

How Leather Is Made? Ways of its Processing

Thanks for your blog, nice to read. Do not stop.

Itís nearly impossible to find experienced people on this topic, but you sound like you know what youíre talking about! Thanks

Next time I read a blog, Hopefully it wont fail me as much as this one. After all, Yes, it was my choice to read through, however I truly thought you would probably have something useful to talk about. All I hear is a bunch of complaining about something you can fix if you were not too busy seeking attention.

what are you looking for?

close
We use cookies on our website to give you the most relevant experience by remembering your preferences and repeat visits. By clicking “Accept All”, you consent to the use of ALL the cookies. However, you may visit "Cookie Settings" to provide a controlled consent.
Cookie SettingsAccept All
Manage consent

This website uses cookies to improve your experience while you navigate through the website. Out of these, the cookies that are categorized as necessary are stored on your browser as they are essential for the working of basic functionalities of the website. We also use third-party cookies that help us analyze and understand how you use this website. These cookies will be stored in your browser only with your consent. You also have the option to opt-out of these cookies. But opting out of some of these cookies may affect your browsing experience.
Necessary Always Enabled
Necessary cookies are absolutely essential for the website to function properly. These cookies ensure basic functionalities and security features of the website, anonymously.
Functional
Functional cookies help to perform certain functionalities like sharing the content of the website on social media platforms, collect feedbacks, and other third-party features.
Performance
Performance cookies are used to understand and analyze the key performance indexes of the website which helps in delivering a better user experience for the visitors.
Analytics
Analytical cookies are used to understand how visitors interact with the website. These cookies help provide information on metrics the number of visitors, bounce rate, traffic source, etc.
Advertisement
Advertisement cookies are used to provide visitors with relevant ads and marketing campaigns. These cookies track visitors across websites and collect information to provide customized ads.
Others
Other uncategorized cookies are those that are being analyzed and have not been classified into a category as yet.
SAVE & ACCEPT